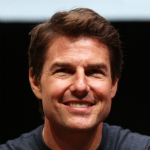 Tom is the only son of Mary Lee and Thomas Cruise Mapother III who have four children. His mother is special education teacher and father is an electrical engineer. Both parents are originally from Louisville, Kentucky. He has Irish, German, and English ancestry. Tom's parents separated when he was 11 years old. He and his three sisters Marian, Lee Anne De Vette and Cass transferred to Glen Ridge of New Jersey with their mother after her remarriage. Educational achievement was not easy for him as he suffered from dyslexia which is a disability to read or understand things in a technique that other normal people are able to do. Tom Cruise was regularly bullied in the schools and for this reason he changed 15 different schools in America and Canada throughout the period of 12 years. He was excellent in athletics and considered build up a career in professional wrestling. But a knee injury distracts him from his goal. He graduated from Glen Ridge High School in New Jersey in 1980.

He studied in Packanack School in Wayne, New Jersey. He brought up in an abusive family and had considered to become a pastor before becoming fascinated in performing arts. He also attended in a seminary to become a priest but dropped out after one year at the age of fourteen. A teacher motivated him to take part in the school's musical production Guys and Dolls at the age of sixteen. After Tom played the lead of Nathan Detroit, he established himself unexpectedly at home on the stage.